These are peptide formulations created from the bioactivity domain of the biologic protein HMGB1. When administered intravenously they mobilize the mesenchymal stem cells in the patient’s bone marrow into peripheral blood, and accumulate them at the site of damage, promoting tissue regeneration and healing of the affected site. Since the mesenchymal stem cells mobilized into the damaged tissue by the medicine directly treat the damaged tissue, a single substance is expected to have a wide range of indications, due to the characteristics of mesenchymal stem cells, which include cell migration ability, immunomodulatory ability, trophic ability, ability to regulate fibrosis, and tissue regeneration ability. In non-clinical pharmacological studies using animal disease models conducted up to the present, good therapeutic effects have been confirmed for diseases including cerebral infarction, myocardial infarction/cardiomyopathy, epidermolysis bullosa, intractable skin ulcers, spinal cord injury, amyotrophic lateral sclerosis (ALS), traumatic brain injury and ulcerative colitis. Since the compound administered is a substance such as a peptide or protein, it can be manufactured, transported, stored and administered by the same methods as conventional medicines. This means that while this treatment resolves various issues relating to regenerative therapy and cell therapy, it can target the treatment of diseases that were difficult to treat with conventional therapies.

As a result of the above basic research, we have continued to collect new findings relating to bone marrow mesenchymal stem cells present in the body, and have obtained a substance that mobilizes new bone marrow mesenchymal stem cells into the blood (RIM3). As with PJ1, this is expected to become a regeneration-inducing medicine for a wide range of diseases involving tissue damage. As well as biologic peptides, we are also developing peptides prepared based on information about biologic activated peptides.

These are protein preparations derived from proteins in the body extracted from living tissue. When administered intravenously or locally, they efficiently accumulate the mesenchymal stem cells in the body to the affected site, and are expected to become therapeutic medicines for a wide range of diseases involving tissue damage.

Since the mechanism of action of these substances is different from that of HMGB1 peptides, their use, either in combination with HMGB1 peptides or as monotherapy, is expected to expand the range of target diseases of regeneration-inducing therapy. In particular, in conditions with a small amount of damaged tissue, the region of ischemia is small, and so there is a small amount of SDF-1α increasing the amount of secretion in a hypoxic state, and thus there is a risk that mesenchymal stem cells may not accumulate at the damaged location. In a situation like this, this substance can be administered to the periphery of the affected site, with the aim of accumulating mesenchymal stem cells in blood circulation to the organ being treated. 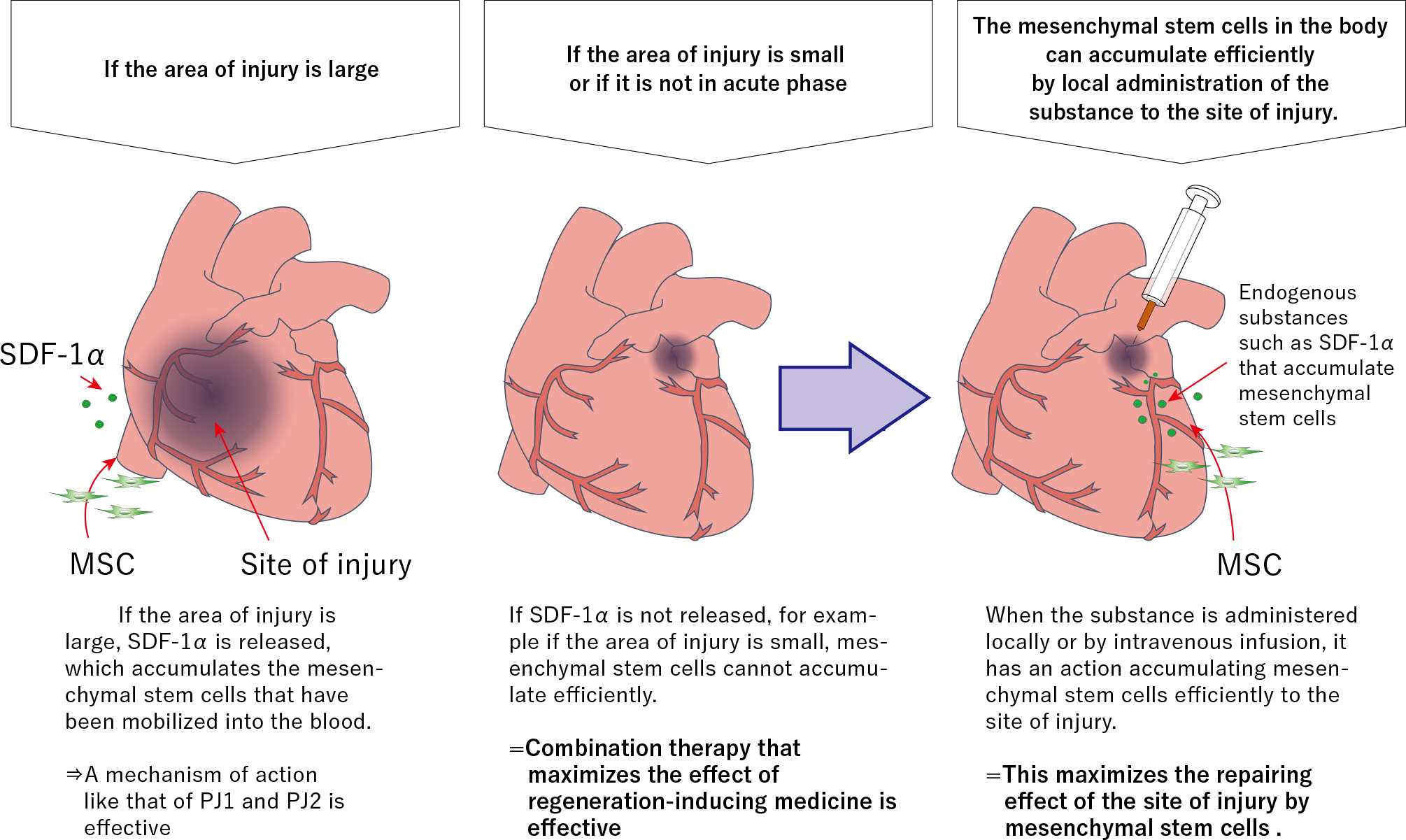